Injured?
We want to help.
Click HereContact Us For a Free Consultation 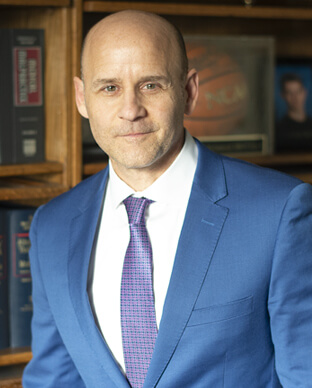 Steve received a BA degree in Political Science from Virginia Tech in 1990. While enrolled at Virginia Tech, Steve worked for both the U.S. Justice Department and the U.S. House of Representatives. Steve obtained his Juris Doctor law degree from the University of Louisville in 1993. He was admitted to practice in New York in 1994. Steve is also admitted to practice in the Western District Court of New York as well as all state courts in Pennsylvania. He is a member of the Chemung County Bar and the New York State Bar Association. In furtherance of his continuing legal education, Steve has attended the National Institute of Trial Advocacy (NITA) trial skills course and routinely participates in legal seminars and training to stay on top of the latest developments and applications of personal injury-related law.

Steve has been awarded an “AV® Preeminent™” Rating (the highest rating possible) from the respected legal guide Martindale-Hubbell, in recognition of his highly regarded legal skills and professional ethics. An “AV® Preeminent™” Rating is a significant accomplishment because it is awarded to only 5% of all attorneys nationally and reflects the confidential opinions of members of the Bar and the Judiciary. This award designation means that Steve has been recognized for the highest professional excellence in the practice of law. First published over 140 years ago, Martindale-Hubbell is widely regarded as providing the most comprehensive and compelling view of lawyers and firms, to aid consumers of legal services in choosing the right lawyer or law firm for their legal matter.

Steve practices personal injury law with the goal of helping accident victims and their families. He has personally recovered millions of dollars in settlements and awards for his injury clients in the past few years alone. In 2012 Steve recovered $3.85 Million on behalf of a motorcyclist against a local county agency which is believed to be the highest such award against such an entity ever achieved in that county. Steve’s practice covers all areas of personal injury including auto, motorcycle, and truck accidents, construction accidents, dog bites, slip and falls, and other accidents. Steve has litigation experience with results both in and out of court. Included in his successful recoveries are dangerous product cases against big corporations such as Wal-Mart, Sears, and Black & Decker. More important, however, is Steve’s dedication and attention to detail in each case he handles. Steve knows that each case he handles requires preparation, diligent representation, and timely results. He is committed to a practice that provides integrity, compassion, and responsiveness to every one of his clients. The numerous attorney and client referrals Steve receives, as well as the testimonials from former clients, attest to Steve’s professional dedication and quality of work.

On a personal note, Steve has been a longtime resident of the Southern Tier. Steve has been a volunteer speaker for high school and grade school students addressing issues concerning the legal profession and personal and career development. He is also an active member of First Presbyterian Church of Elmira where he served as a Deacon. Steve’s hobbies include golfing, fishing, boxing, bicycling, and numerous other sports.